This website or its third-party tools use cookies which are necessary to its functioning and required to improve your experience. By clicking the consent button, you agree to allow the site to use, collect and/or store cookies.
Please click the consent button to view this website.
I accept
Deny cookies Go Back
You are here: Home / systems view of the world / The Transformational Message of Deming for Today’s Fragmented World 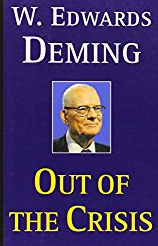 “It would be better if everyone worked together as a system.” These few, simple words reveal a mindset and worldview capable of transforming everything we do.

Transforming what? A divisive, zero-sum-game way of doing business and managing/controlling people towards one of whole systems optimization. This is not idealism. This is applying systems science to human efforts to achieve given goals in a way that benefits not just a few but all the stakeholders. Again, this is not idealism. This is simply the most effective way to achieve sustainable economic growth. When everyone benefits,  the positive effects multiply throughout the entire system.

Dr. W. Edwards Deming was the American statistician and physicist who was heeded by the Japanese after World War II. Thanks to Deming’s input and their ability to put what they learned it into practice, Japan achieved the “economic miracle” of evolving quickly from devastation to becoming  the second most powerful economy in the world. It was a pleasure this week to come across an article introducing a new generation to the transformational work of  Deming and stressing its relevance to solving key issues in the 21st century. See Scott Santen’s article ‘How Can We Transform America’s Broken Economic System to Work for Everyone‘.

Deming introduced the concept of working as a system to the Japanese through his diagram ‘Production Viewed as a System’. Santens reminds us that Deming placed this diagram on the blackboard of every conference with top management in Japan in 1950 and onward, and it was seen by 80% of all owners of capital.

As a whole, production seen as a system reveals interdependence. Every part of the loop is a part of the system, and every part works together with every other part for the benefit of the entire system that never stops improving. 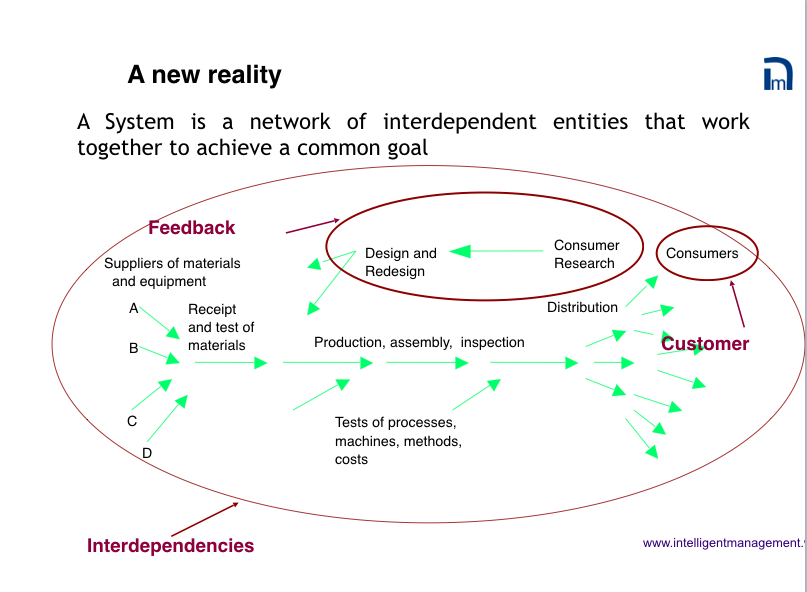 Bringing the new reality with the transformational message of Deming

Deming was ahead of his time and many still lag behind his systemic thinking even today. However, times are changing. As Dr. Domenico Lepore puts it, “Rigorous studies have proved is that not only are divisiveness and individualism unsustainable in a globally interconnected world, they are contrary to the basic biochemical fabric of our very existence. Economics and politics, as well as management, have been almost oblivious to these findings and for the most part continue to regurgitate the same old recipes; they continue to apply patches instead of acknowledging the new emerging paradigms. Win-Win conflict resolution, cooperation instead of competition, symbiosis instead of survival of the fittest, patterns not just structures; these today are some of the basic, well understood elements that make up a society that can sustain its ambition to evolve and prosper, as well as the founding elements of our biological existence. Life, as we experience it on this planet at every level, is based on interdependencies and interconnections. We exist within a “web of life”, a network of interdependencies that cannot be understood solely in terms of its basic components but has to be studied in terms of its interrelations.” See ‘ Sechel: Logic, Language and Tools to Manage Any Organization as a Network’

The fields of business and management are two areas where there is currently an alarming lack of understanding of how we, as humans, can live and thrive together. Most organizations are still dominated by a command and control mentality and organizational structure. This not only perpetuates a culture of divisiveness, it creates fragmentation when the digital age is demanding speed of flow.

The good news is that rock solid elements of foundational knowledge to thrive in our times of complexity do exist and as humans we have the ability to think and learn. What is required today is systemic intelligence that allows us to tap into that higher level of consciousness that makes us see what we know and who we are as one.

Since 1996, thanks to the support of a talented team including several physicists and engineers, Intelligent Management has drawn from systems science and network theory to develop the epistemological framework, the method, tools and organizational design for organizations to flourish as whole systems. This began with the intuition of  our Founder Dr. Domenico Lepore to create a synergy between the transformational work of W. Edwards Deming and the powerfully practical applications of the Theory of Constraints. We call it the Decalogue Methodology. It has been our privilege to carry out this work in Europe and North America with implementations in organizations of different sizes and sectors, from smokestack to hi-tech.

A way to move out of the crisis exists. It is up to us to make that choice.