This website or its third-party tools use cookies which are necessary to its functioning and required to improve your experience. By clicking the consent button, you agree to allow the site to use, collect and/or store cookies.
Please click the consent button to view this website.
I accept
Deny cookies Go Back
You are here: Home / Systems Thinking / Remembrance of the Future: Brexit and Trump 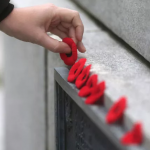 Two major disruptions have happened recently that most people did not see coming. One is the Brexit referendum, something that is threatening the hard-earned unity of Europe, the other is the election of Donald Trump as President of the United States.

It’s something to reflect on, especially today, Veterans Day in the USA and Remembrance Day, celebrated in Commonwealth countries since World War I to commemorate those from the armed forces who died in service for their country. These people died to defend democracy and freedom from oppressive regimes. In Europe, we have lived in peace since the end of WW II. Not only has it been possible to defeat the threat of Nazism and Fascism, we have built an economic union based on common interest, values and wellbeing.

A United States of Europe?

Amid these British and American upsets, Winston Churchill comes to mind (not only due to binge watching the remarkable Netflix series ‘The Crown’). Churchill was a half-American British leader. As such, he was uniquely poised to create the understanding that led America to support the British war effort. Churchill, in spite of the very fresh memories of the atrocities and hatreds of WW II, was able to suggest there should be a ‘United States of Europe’.

In other words, it was clear to Churchill that the only way forward was through union. Sadly, the responses of governments post 2008 global economic crisis have created more hardship for many in Europe and the USA. The lack of economic security due to austerity measures has led to a sense of anger and exclusion, hence the rise in violent emotions of xenophobia, misogyny and other manifestations of hating, rejecting and humiliating ‘the other’. People look for a simpler world and isolationism, where building walls and separating from well established unions feels like an answer to some.

The Age of Complexity

We now live in the age of complexity. Attempts to ‘simplify’, cut loose from ties and build walls are completely antihistorical. Brexit and Trump are antihistorical. Why? Because the interdependencies (commercial, political, economic, social, historical) that bind us all together globally are too many and too complex to unravel. The only way to thrive and prosper today is to understand those interdependencies and networks and work to influence the networks in the direction of a shared prosperity. Excessive polarization, in the long run, will lead to global disaster: when the nodes of a network become too separated, the network collapses. At that point, no matter your ‘net worth’, it will be calamitous for all.

The only way forward: cooperation

“I am now going to say something that will astonish you. The first step in the recreation of the European family must be the partnership between France and Germany.”

If Churchill could see the need for collaboration and union among enemy nations so soon after the devastation of WW II, how much more should we, today, be able to see a way forward based on peace, cooperation and mutual understanding?