This website or its third-party tools use cookies which are necessary to its functioning and required to improve your experience. By clicking the consent button, you agree to allow the site to use, collect and/or store cookies.
Please click the consent button to view this website.
I accept
Deny cookies Go Back
You are here: Home / Uncategorized / Competitiveness at National Level – Lepore Unleashed 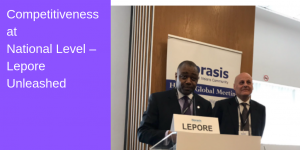 Today’s post is by our Founder Dr. Domenico Lepore, based on the speech he was asked to give about ‘Competitiveness at National Level’ at the Horasis Global Forum last week.

There is a very long “Laundry List” of elements at play in creating competitiveness for a Nation: from Education to Healthcare, from Transparency to Cybersecurity, from Trade to Industry. The list goes on and none of the elements can be downplayed.

I view competitiveness as an emergent property, something that happens when the interdependence of many factors coalesce in a way that has been epistemologically designed towards a chosen goal. As such, today, competitiveness can only happen in the realm of what we can call Complexity, what happens when things start coming together in a very tightly knit network of interdependencies.

Nations must be viewed for what they are: an ever-growing web of conversations, fuelled by the ingenuity, drive and desires of its people. How can we funnel this energy towards the goal of increasing competitiveness?

If I were to advise the leadership of a Nation (Politicians, Industrialists, Educators, etc.)  I would urge them to create a vision for a desirable future, to find an aim that can be really common to all its citizens, and delineate a path to achieve it. Such a path must leverage what is unique about the Nation and foresee the development and effective deployment of the needed competencies.

Hubs and Nodes in a Network

I would stress the fact that Education, Healthcare, Industry, etc are elements, hubs and nodes of a Network and they cannot be optimized in isolation; rather they should be coordinated to achieve an overarching vision. This, I think, should be the role of Government. Personally, I would  even re-think the way Ministries are created and coordinated and would veer towards a much more systemic way of using and allocating the Nation’s resources. Simply put, I would stop looking at the whole as a summation of its parts and I would promote a more “complexity aware” method to make parts interdepend.

All of this requires true leadership, one that is capable of going beyond political skirmishes and personal gains and able to systematically generate win-win solutions to any situation of blockage. There are glaring examples of such cohesiveness in the past, such as the bi-partisan choices of Lincoln and Eisenhower in the USA, Churchill in the UK, De Gasperi in Italy, but they seem to be few and far between today. In contemporary times, Without reaching the heroic heights of Nelson Mandela, we can look to the daring stand against austerity measures in Portugal under Prime Minister Costa.

Leadership “in the time of complexity” requires a different mental approach to problems and a radically new way to develop solutions. Look no further than Brexit for an example of what it means to ignore complexity or to the Austerity policies that have made Europe lose a decade of growth.

What “competes” today are not single companies or single Nations. We all exist as parts of some (or many) networks of value; globalization simply accelerates and scales up the need for making these networks more cohesive and effective. Globalization is a word that frightens many because it is governed by complexity principles that the majority of us does not comprehend. The instinctive reaction is to “build walls”, to separate, to isolate. Indeed, this is not possible. What instead is possible is to educate.

Ultimately, if human intelligence will continue to be a driving factor and we do not succumb to Robots, the answer to complexity (and competitiveness) will be better thinking, better management of emotions and a radically new way of learning.

Since 1999, we have been presenting a new model for a systemic organization in detail, both in terms of the thinking behind it and how to conduct operations. We work alongside CEOs and Executive Teams to support the shift towards more effective, systemic strategy and operations. Our books include ‘Deming and Goldratt: The Decalogue‘, ‘Sechel: Logic, Language and Tools to Manage Any Organization’, ‘The Human Constraint‘ and most recently,  ‘Quality, Involvement and Flow: The Systemic Organization’ .  We support our international clients through education, training and the Ess3ntial multi-project software using Critical Chain to schedule competencies and unlock the potential of human resources. Based on our proprietary Decalogue methodology.