This website or its third-party tools use cookies which are necessary to its functioning and required to improve your experience. By clicking the consent button, you agree to allow the site to use, collect and/or store cookies.
Please click the consent button to view this website.
I accept
Deny cookies Go Back
You are here: Home / systems view of the world / The Theory of Constraints on Wall Street – a SPAC Experience 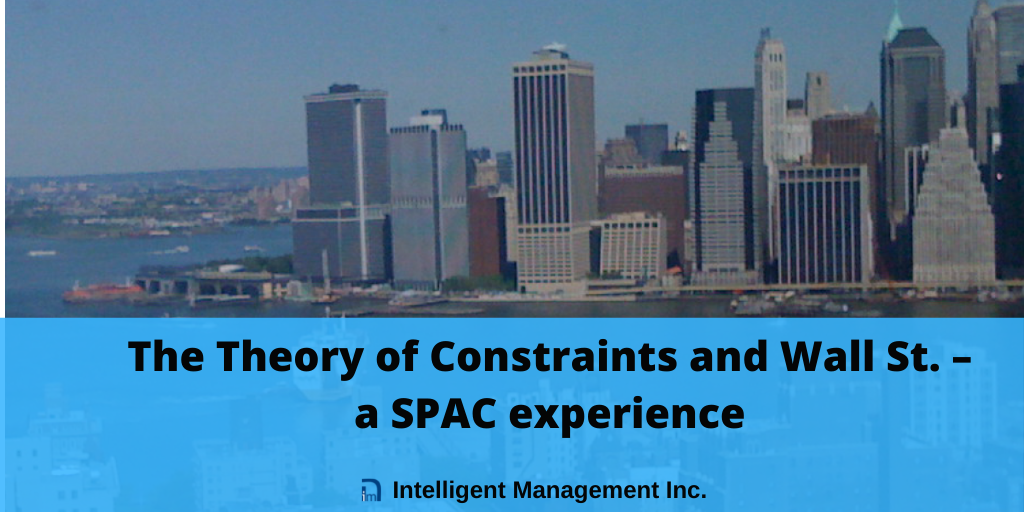 This post is by Angela Montgomery, author of ‘The Human Constraint‘.

Many people lump the Theory of Constraints together with Lean and 6-sigma as “techniques for continuous improvement”. This is a woefully inadequate perception of the Theory of Constraints (TOC). In all our publications we attempt to  illustrate the universal scope of Dr. Goldratt’s achievement in developing TOC. Why is it that it can be applied powerfully in a steel foundry and in a nursing home? It’s because TOC starts by identifying the situation of blockage in any given reality and enables leadership teams to develop a breakthrough, systemic solution. This is what has allowed us at Intelligent Management to work with so many different sectors, applying TOC in all its aspects, including Systemic Strategy, External Constraint and the Thinking Processes, Drum Buffer Rope, Replenishment/Material Management, New Business/Product Development, Innovation, Project Management, and Throughput-based measurements/cash management. So what has this to do with Wall Street?

People raise money on Wall Street to finance business projects on a grander scale. There has been a boom in a particular vehicle for raising money known as a Special Purpose Acquisition Company, or SPAC, raising roughly $200 billion between July 2020 and July 2021 . An article in the New York times in June this year  stated that SPACs “have singlehandedly revived the market for initial public offerings, taking small companies public by the dozens.”

SPACs raise money with a 2-year timeframe to find and complete the acquisition of a private company and take it public. While this opens up opportunities for investment and for smaller companies to go public,  there are inherent flaws in the model that encourage early investors to make money on trading, rather than investing for the long run. This is clearly outlined in Andrew Sorkin’s article ‘How to Fix SPACs: Keep Their Backers Locked In Longer‘ .

In my business novel, ‘The Human Constraint’ (so far bought in 43 countries!)  the story unfolds throughout the global financial crisis 2007-9. Chapter 3 ‘Vertigo’ describes the experience of a new SPAC and how one of the protagonists deduces, using the systemic cause and effect reasoning that TOC engenders, the inherent danger in doing a SPAC.

The following is a short excerpt from Chapter 3 ‘Vertigo’ from my business novel  ‘The Human Constraint ‘, the first part of which is set in New York during the global financial crisis 2007-9.

Sam arrived at the 42nd Street exit of Grand Central Station with 20 minutes to spare. He pushed through the glass doors, pulled out a map of the streets and examined the neat grid. Topology by numbers. Topos. Greek for place. Not much use here,  all those  hours at high school in southern Italy translating ancient Greek and Latin.  The Manhattan air was sharp and sweet with its mix of oxygen, adrenalin and possibility. He checked his watch that he had already set at six hours behind Milan time. Like gaining extra life, Francesca used to say. Even four years after the accident he could still hear her say that. And he always used to remind her that unless they travelled faster than the speed of light, time would never slow down, and physics aside, his love would only increase as they got older. But she always delighted in the idea of those extra hours. The irony of it. No time to dwell on all that now. He’d calculated it would take forty minutes to get to the meeting with Nick Anselmo and the others at the law firm’s offices, plus a fifteen minute buffer to absorb inevitable variation. Variation. Had he bored May stupid with his explanations? She seemed to have an intuitive grasp of much of what he’d said to her.

Jarnett and Jarnett of Madison Avenue was where the meeting was being held. There was no getting lost in New York’s old modernity. All you ever needed was a clear frame of reference and a precise destination. But he needed to sharpen his thoughts and get focused for the discussion, their first official TPK Holdings meeting all together. He spotted the familiar logo of a coffee shop a few yards away where he could spend the unused buffer time and within seconds was ordering a double shot espresso.

Perched on a stool facing out onto Madison Avenue, Sam sipped the hot black liquid and winced at the taste. With coffee like that they would go out of business in a week in Italy, but this was not Italy, and he would just have to adapt. Nor could the size of the project they were undertaking ever be done back there. He took out a notepad and jotted down ‘Negative Reservation about SPAC entity’. Their original plan had been simple, logical, elegant, and powerful enough to get him to relocate across the Atlantic with no guarantees. Identify a target company for an acquisition, raise the money from keen investors as a private equity fund, complete the acquisition and manage the company. Straightforward. The investors would be keen given the team’s successful track record in producing reliable and robust results with a systemic methodology. But now the game had changed. Now they were a Special Purpose Acquisition Company, or SPAC, on the advice of their Madison Avenue lawyers, and Sam had never been comfortable about that. Raising the $150 million through more than 100 grueling and frustrating meetings with investors had been an achievement, that much was certain. But they had done it as a SPAC with no target company to buy, just the idea of a company. Nothing real or tangible, just like a derivative, no intrinsic value. And why had people invested in that? Just so they could flip the shares and speculate? Then the shareholders would have no interest in the real goal of their project. That was his fear. That was his negative reservation. He had to get it down on paper in the logical format, the way he insisted everyone else should do. That way they could examine it together and look for a shared solution. After a few moments of thinking it over, he wrote down a verbalization of his negative implication:

“TPK Holdings will be prevented from completing the acquisition because shareholders vote no.”

Then he added the logical steps to get him to that statement. Sam continued scribbling then read back through his notes. The logic was solid and therefore all the more worrying. If this were true then they had got themselves into a straitjacket before they’d even started. He’d changed continents at age forty-six for this. He crushed his coffee cup in one hand and threw it into the garbage. They would have to have this out in their meeting. Not exactly the way he’d envisaged their first official get-together, but what was done was done. They had to look ahead now.

In our next post we will illustrate the Thinking Process that Sam used to illustrate his “negative reservation” to his colleagues so they can find a way forward. This is a critical systemic Thinking Process for anticipating and addressing potential negative outcomes for any plan of action that all leadership teams should know.

Intelligent Management has been guiding organizations to adopt a systemic approach to manage complexity and radically improve performance and growth for over 20 years through our Decalogue management methodology. The Network of Projects organization design we developed is supported by our Ess3ntial software for multi-project finite scheduling based on the Critical Chain algorithm.

See our latest books Moving the Chains: An Operational Solution for Embracing Complexity in the Digital Age by our Founder Dr. Domenico Lepore,   The Human Constraint – a digital business novel that has sold in 42 countries so far by Dr. Angela Montgomery and  ‘Quality, Involvement, Flow: The Systemic Organization’ from CRC Press, New York by Dr. Domenico Lepore, Dr. .Angela Montgomery and Dr. Giovanni Siepe.