This website or its third-party tools use cookies which are necessary to its functioning and required to improve your experience. By clicking the consent button, you agree to allow the site to use, collect and/or store cookies.
Please click the consent button to view this website.
I accept
Deny cookies Go Back
You are here: Home / Intelligent Management Success Stories 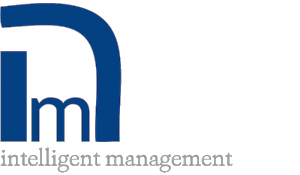 Learning is not compulsory, neither is survival.

Gearing up to compete in an increasingly digitized market

In today’s interconnected and increasingly digitized world, companies face an ever-present challenge: how to gear up to compete and be effective.

A major obstacle is that many companies think and organize their work in silos. When a silo mentality pervades business and interactions, not only does it slow the pace of delivery of goods and services, it prevents the continuous innovation that today’s market requires.

Intelligent Management has been helping companies for over two decades to overcome siloed thinking and actions through a robust, science-based whole system approach. We transfer to clients in a structured way the knowledge, thinking and communication processes and the management methods to radically improve performance and compete in the 21st century. We help companies shift to a new paradigm based on network of interdependencies and speed of flow.

Our unique methodology creates high and sustained focus and synchronization of resources to optimize flow while reducing variation. We achieve this by powerfully integrating protocols from the Theory of Constraints with the systemic management philosophy of W. Edwards Deming.

The core of our clients have been manufacturing companies with some level of technological innovation, ranging between $10M and $1 billion in annual sales with owners or top executives open and willing to challenge their thinking processes and learn to work with method to bring the desired changes into operation.

Sectors we have served include:

A metal foundry had made a major investment in a new plant that guaranteed production of 100,000 tons per year. Despite their 70 years of experience in the sector, the client was unable to produce more than 80,000 tons. As they had not identified the constraint, they were managing a series of interdependent bottlenecks with all the subsequent inefficiencies. By helping them to identify and schedule the constraint in their production process, they were able to reach 100,000 tons within 6 months of working with the methodology.

A multi-national, world leader graphite electrode producer was unable to avoid stub loss in the graphite electrodes they produced. A stub-loss-free electrode would have been a significant innovation and competitive advantage in their industry. By guiding their team of scientists through a careful analysis of the problem, we enabled them to surface all their assumptions/mental models regarding the issue to create a breakthrough solution. The new solution became an award-winning patent.

Speeding up Merger and Acquisition process

A holding company in New York was faced with a time-sensitive task to identify and acquire a corporation. It successfully raised 150 million dollars using the methodology. It needed to drastically accelerate the process of SEC approval to complete the acquisition in time or lose 150 million dollars raised from investors. The conventional method would have been to follow best practices (benchmarking) on dealing with the SEC. Instead, by carefully analyzing all the assumptions associated with following the conventional path, it became clear that the quickest path to a solution was to study the connected laws and align all interactions with the thought process of the SEC. This solution led to the fastest ever recorded acquisition by a SPAC (Special Purposes Acquisition Company).

Handing over a family business to next generation

A well-established and highly profitable industry was stuck in an emotionally complicated phase when it was clearly necessary to hand over the reins to the next generation. The father who had founded the company could not delegate fully to his children. Following a rigorous, yet very emotional cause and effect analysis, we were able to guide the family through a systematic process of delineating a detailed solution, strategy and roadmap for a smooth transition that was satisfying for all involved.

A government agency had become bogged down in its bureaucratic processes and knew it had to drastically improve performance to serve citizens more effectively and efficiently. Working with the methodology, they identified the blockages in their thinking about the nature of their work and where the shift needed to happen in their mode of delivery. Within four months we worked with them to develop a full solution, strategy and roadmap to shift from an overly bureaucratic and hierarchical organization towards managing their work commitments as a Network of Projects.

Very often, decisions regarding sales activities are driven by price/volume type considerations and a flawed understanding of market dimensions and typology of products and services that can be offered, given the skills and manufacturing capabilities present in the company. Over the years, we have helped a variety of manufacturing and service organizations to multiply their offering in every segment at a price that was profitable yet not disruptive.

Steel mills, steel service centers and manufacturers of steel-based products, especially in North America, are historically entangled in lose-lose relationships. While the time from molten liquid to a cooled coil is three days, the supply to the manufacturers very often exceeds ten weeks, creating a gigantic immobilization of capital in the form of inventory. By working with these three links in the chain, analyzing the cause and effect relationships and their underlying, often non-verbalized, mental models, we helped relevant players in North America to shrink the entire process from over ten to roughly two weeks.

Only a very tiny fraction of junior mining companies (prospectors) actually continue on to mining metal. They are acquired by mining companies, go bust, or simply give up. This is largely due to capital and organizational mindsets necessary to perform prospecting and mining. It is rather like transforming a group of ‘mad scientists’ into a fully functional and money-making corporation.

The Board and shareholders of a junior mine in the north west of the USA sitting on a bonanza grade of precious metal, in an area where no one had succeeded in mining in the previous 40 years and in close proximity to villages of historical value, decided to go the whole nine yards and become a fully-fledged open mine operation. After failing for four years and burning over USD 50 million, in less than a year of working with the Decalogue methodology they started to dig metal and in a few more months reached break even. This was made possible through a painstaking analysis of the mental models underpinning their way of thinking, especially in relation to change in scale of operations (from a handful of geologists happy to go out and poke holes in the ground to a 150-people full scale mining operation). From orchestrating a capital raise to the hiring and training of personnel through to all the operations connected with producing the ingots and shipping them, this transition was aided by a very carefully thought through Future Reality Tree and a masterfully executed project plan.

Turnaround of a multinational

A failing American multinational was facing serious financial difficulties. They adopted our Decalogue methodology at a global level over a three-year period. This led to achieving measurable results in increased productivity, unleashing of untapped capacity, award-winning patents and a stock price that increased in value seven-fold.