This website or its third-party tools use cookies which are necessary to its functioning and required to improve your experience. By clicking the consent button, you agree to allow the site to use, collect and/or store cookies.
Please click the consent button to view this website.
I accept
Deny cookies Go Back
You are here: Home / Systems Thinking / While Greece sinks, Canada launches a thousand ships 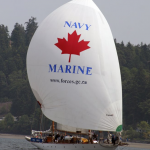 In the past few days we have read about two starkly contrasting scenarios. In one, the Canadian government awarded three decades of shipbuilding work (33 billion dollars) to two private shipbuilding yards in Halifax and Vancouver.  Reports from Greece, instead, speak of entrepreneurs sacking workers who earn 1200 Euros per month to replace them with others who accept 600 Euros.

In a time of global crisis, it’s impossible to be indifferent to the creation not just of  an estimated 15,000 jobs in the Canadian shipyards, but three decades of them. Enough for an entire generation. What will be the systemic repercussions of this?

Undoubtedly, enormous kudos (to coin a Greek term) for the Harper government for creating an economic stimulus not based on printing money, but on creating real jobs based on production, the true engine of any nation’s economy. The contracts ensure government officials unhindered access to all the books as well as ‘step-in’ rights for the government in case of default by the private shipyards. The Harper government has taken this action at the expense of spreading consensus nationwide because they have left out Quebec. In other words, they have acted in the interest of the nation instead of purely in the interest of political gain.

What this means for the island province of Nova Scotia (less than a million souls on an area which is one third of the state of New York enjoying c 7000 km of coastline) goes beyond just the jobs: it is about the building of a community. Workers will no longer have to leave their home region to seek work in another province with a different expertise-base. It will reunite families who currently reside in split locations to guarantee their earnings. It concentrates shipbuilding talent in a region to create a hub and should create better economies of scale. It shifts the focus and mindset from fire-fighting to a future-oriented one of planning, scheduling and execution.

On top of the creation of an average of 8,500 new jobs per year, according to the Globe and Mail newspaper “The Greater Halifax Partnership study predicted an increase of 420 new homes constructed and 750 new cars sold each year of peak production. Other spinoffs are projected to include nearly $50-million annually in groceries and restaurant meals.”

It’s good news all round.

And what about Greece? The cuts and crisis in Greece are further fed by corruption and lack of ethics  among employers, and these traits in turn are leading to an increase in fear and crime as well as mental and physical sickness. These negative developments are further exacerbated by government cuts in health services, including mental health care and rehab centres for drug addicts when they are needed most. The result is a loss of community and loss of dignity.

When, instead, you stimulate the growth of a community, you close the gap between what a person does for a living and who they are. The challenge for Nova Scotia will be to create and sustain that high level of interconnection with all those who work in the industry by better satisfying their needs, including the suppliers and customers. The inevitable outcome of this level of consciousness and connection is a more ethical way of operating. There is automatically no space for hedging and undercutting, or for polluting the environment. In other words, a healthy supply chain ecosystem promotes physical and moral health.

When you create an environment for self-actualization, where people are involved in creating a future they want to be a part of, you have established the groundwork for true transformation.