This website or its third-party tools use cookies which are necessary to its functioning and required to improve your experience. By clicking the consent button, you agree to allow the site to use, collect and/or store cookies.
Please click the consent button to view this website.
I accept
Deny cookies Go Back
You are here: Home / Systems Thinking / How Should We Treat the Foreigners in our Midst? 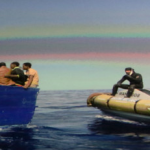 Globalization is accelerating interdependencies among nations. A complex web of trade and power creates wellbeing as well as wars and this triggers patterns of migration that have always existed but never with such speed. Financial crisis, austerity and diminishing quality of life opens space for populist messages to take hold. Discontented citizens look to nationalism and separatism as a way “ahead”. The way we treat foreigners and migrants becomes a crucial measure of how we are doing in terms of being evolved and enlightened humans.

What is an immigrant?

Anyone who has been through the process of immigration (this author three times) quickly learns that everything you took for granted in your own country has to be re-acquired. It is a ground-shaking and humbling experience. You lose the right to services and the democratic status of voter until you pass through various bureaucratic, legal and financial processes. When resident status is acquired, you nevertheless remain in some way ‘other’, whether by ethnicity, accent or behaviour (including spelling). What makes the difference to the quality of life of immigrants is the level of tolerance that indigenous people have to ‘others’. Tolerance, however, has to go deeper than political correctness. It cannot just be about politeness but about real change. Our natural biases that lead to discrimination in favour of those who are “like us” have to be challenged in a behavioural way (see article about prejudice and the sharing economy).

America has always been a symbol of internationality and integration. It has always enjoyed the fame of being a place where resourceful foreigners brought their cultures, labour, skills and talents to create a unique nation of opportunity. Where would the scientific and technological advances have come from without the influx of European scientists during World War II? Since the tragic events of September 11 2001 America has become an increasingly less welcoming place. Today we are seeing this in an extreme form. America, like Britain, should understand that as an ageing population it needs the influx of immigrant labour and skilled workers to remain competitive. But then, every empire has its sunset.

The best foreign film candidate at this year’s Oscar Awards comes from Italy. The film ‘Fuocoammare’, or ‘Fire At Sea‘ recounts the stress, sorrow, bewilderment and every day heroism of civilians and military coping with the continual influx of desperate migrants to the island of Lampedusa. The film is a masterful and moving observation of one of the most distressing phenomena of our times.

Many of us are familiar with the Ten Commandments. What we may not know is that they are a subset of a myriad of detailed instructions, both positive and negative. Among these instructions there is one that forbids mistreating foreigners, or aliens. It’s a topic that after thousands of years still hits home today. Systemic thinking is what we aim to promote at Intelligent Management. It’s an approach that helps us examine our own assumptions and see the other’s point of view. It serves to raise our consciousness of the implications of interdependencies and the decisions we make about them. Whether we are conscious of it or not, how we treat foreigners will inevitably affect the quality of the society we all live in.

Angela Montgomery Ph.D. is the author of the business novel+ website  The Human Constraint. This downloadable novel uses narrative to look at how the Deming approach and the Theory of Constraints can create the organization of the future, based on collaboration, network and social innovation.  Angela is partner and co-founder of Intelligent Management and co-author with Dr. Domenico Lepore, founder, and Dr. Giovanni Siepe of  ‘Quality, Involvement, Flow: The Systemic Organization’  from CRC Press, New York.