This website or its third-party tools use cookies which are necessary to its functioning and required to improve your experience. By clicking the consent button, you agree to allow the site to use, collect and/or store cookies.
Please click the consent button to view this website.
I accept
Deny cookies Go Back
You are here: Home / Systems Thinking / Systems Thinking in a Milan Taxi 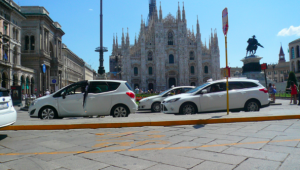 The World Expo took place in Milan this year and brought hundreds of thousands of people to visit the city.  It’s a city I lived in for many years so I know its appeal and pitfalls well. While taking a ride to the airport in Milan for a London flight this week, a chat with the lady driving the taxi brought up things that every business should think about, for the short and the long-term. Especially greed.

Milan is already a very international city thanks to fashion and finance. International visitors are no doubt charmed by the city’s elegance and thrilled by its pace, while frustrated by the logistical hurdles of such an ancient place, not to mention how few Italians speak English still today. My taxi driver commented on the lack of work the city still faces, no matter how glitzy the shops and bars may seem, and how she had invented her work for herself.

She told me about her disappointment with the World Expo. Hotels like Ibis had charged as much as 300 euros for a room that normal costs around 120. They probably thought this was a smart way to make more money from the myriad of Expo visitors. But what was the knock-on effect of their greed, bordering on profiteering? The taxi driver explained that people would fly in for one night only, go to the Expo and back in a day and fly home. The only people making money from this, she said, were the airlines, because these visitors did not use taxis, restaurants or other services in the city.

A city as an ecosystem of businesses

It never occurred to many of the businesses in Milan that they are in fact an ecosystem, or in more conventional terms, a value chain. What could happen if businesses did some systems thinking and realized this? At a minimum, by not overcharging for accommodation, visitors could stay longer and spend money on other services the city offers, so more business would benefit. Those hotels that overcharged might have gained in the short-term, but they, and others, will lose out in the future because they made visitors feel ripped off and, therefore, unlikely to return. Their narrow thinking has prevented a slew of possibilities. For example, what if they got together with others and offered a set of combined services for visitors as packages? Visitors would feel welcomed by a hospitable city, stay longer, and feel encouraged by that experience to return.

And what if businesses pooled together to pay for English lessons and to learn the basic phrases they need for their work with visitors in other languages? That way, my taxi driver could speak to other passengers, not just people like me who speak Italian. She would be able to offer advice and suggestions. Better service means better tips. Everybody wins.