This website or its third-party tools use cookies which are necessary to its functioning and required to improve your experience. By clicking the consent button, you agree to allow the site to use, collect and/or store cookies.
Please click the consent button to view this website.
I accept
Deny cookies Go Back
You are here: Home / Systems Thinking / South Africa’s Subprime Crisis: A possible solution? 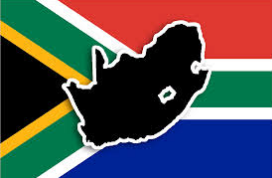 A recent NYT article talks about  South Africa’s Subprime Crisis. The article draws attention to the downward economic spiral created by unsecured credit in South Africa. The author of the article,  T. O. Molefe, describes the situation succinctly and clearly. South Africa’s regulations had saved the country from the 2007 USA Subprime fallout. Sadly, South Africa now has its own crisis with the collapse of African Bank.

What went wrong in South Africa?

Certainly, the failure was not for lack of good intentions. The South African government saw unsecured credit as a solution to the exclusion of low-income earners from the financial system.  South Africa has a chronic inequality problem, with a massive proportion of low-income households. But there have been drastic unintended consequences to the government’s development plan, due to the exorbitant interest rates on micro credit charged by African Bank and other commercial lenders.

“…borrowers’ incomes hadn’t grown fast enough to keep pace with the extremely high interest payments and fees after they had paid for basic needs like rent, food, transport and telephone bills. This trapped borrowers in a vicious cycle, whereby they had to take on more debt just to survive, and African Bank gladly obliged, until the inevitable default happened.””

The ripple effect of the default and recent bailout of African Bank will be felt throughout the struggling economy of South Africa.

What can be done to make it right?

Mr. Molefe has a suggestion for a solution: a government bank that lends to low-income earners at fair rates.

We would call what Mr. Molefe suggests an “injection”, in other words, a potential breakthrough that invalidates limiting beliefs creating a situation of blockage, and that protects the legitimate needs of those involved. We have analyzed his proposal from a systemic thinking viewpoint below.

Summarizing the problem with a Systemic Thinking Tool

A systemic tool called the Conflict Cloud can be used to summarize the problem.

Using a systemic thinking process tool called the conflict cloud, we can frame the problem as a conflict to work towards a solution. We can verbalize the position that caused the problem as:

This position is adopted to protect a legitimate need: 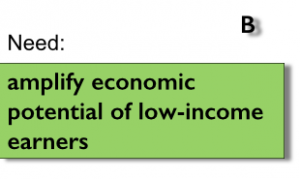 The opposite position would be:

and the need this position protects is:

A common goal to these two needs is:

In order to derive a solution, or check the robustness of a solution, we need to surface the assumptions and limiting beliefs that surround the positions of the conflict. The assumptions we have surfaced are contained in the blue boxes (click to enlarge the image). 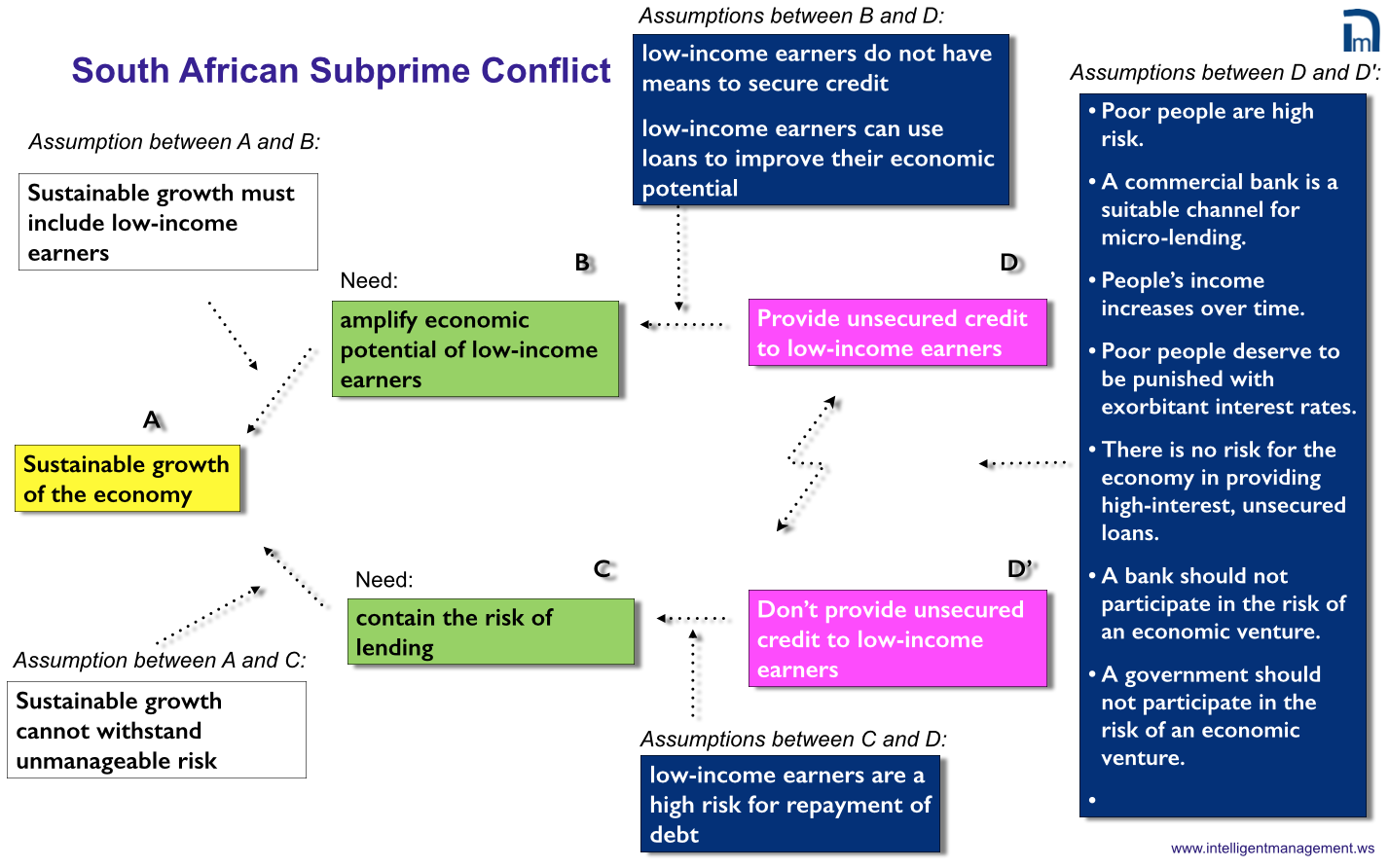 A robust injection, or solution, is one that invalidates the assumptions between D and D’, thus making the conflict disappear, but that at the same time protects the needs (green boxes). This seems to be the case for Mr. Molefe’s proposal: 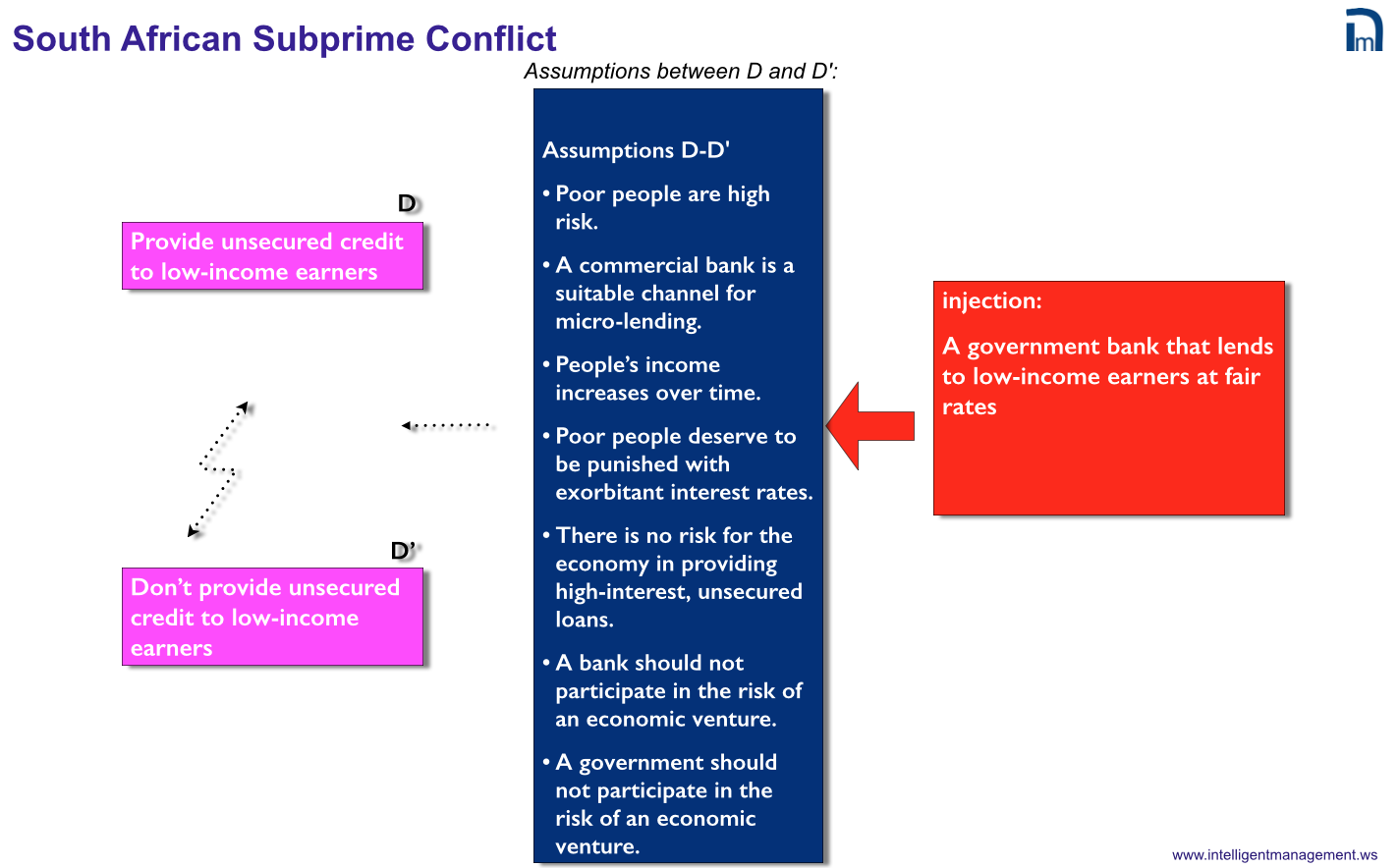 Mr. Molefe’s suggestion may well be the “injection” that is needed. It could prove to be the breakthrough solution that invalidates the limiting beliefs that have created the situation of blockage, and that protects the legitimate needs of those involved. The question then becomes, how can we transition from a very solid proposal towards a full-blown and effective execution of a solution that transforms the system? What would constitute a robust, systemic solution? This would involve answering the following questions:

Only if we are willing and able to answer these questions will we be able to transition from the present that Mr. Molefe so insightfully describes to the future reality he hopes for. South Africa has the intellectual energies and it needs to find the focus to carry out such a plan. We will all be better for it.