This website or its third-party tools use cookies which are necessary to its functioning and required to improve your experience. By clicking the consent button, you agree to allow the site to use, collect and/or store cookies.
Please click the consent button to view this website.
I accept
Deny cookies Go Back
You are here: Home / Systems Thinking / Opportunity Can’t Come from a Silo 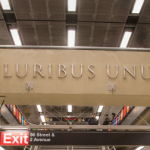 As a new American president is sworn in, it’s worth remembering the traditional motto of the USA emblazoned on the new subway stations in New York: ‘E pluribus unum‘, meaning “from the many, one”. In other words, unity from a multitude.  The USA has always represented a society of opportunity, enriched by a wealth of different cultures and where ‘upward mobility’ is feasible. Today, instead, our world faces levels of fragmentation, polarization or ‘bubbles’ that are unprecedented. Where do you belong?

A hierarchy naturally produces silos as people report vertically upwards towards the top. However, silos can be created in many ways. Just take a look at transport. In Europe, the notion of  ‘third class passenger’ is something that belonged to history, to a time when there were still servants and social mobility was unattainable. You had to know your place and not try and rise above it. Well, today we not only have third but also fourth class. It’s just called differently. Maybe ‘standard economy’, but it’s the least comfortable and clean with three categories of comfort above it. Similarly, planes used to be coach and business, but now there are four categories on long haul flights and the lowest category always gets further squeezed and crowded to make space for the more expensive seats. By increasing the categories of comfort (or discomfort), we reinforce the idea that the ‘deserving’ get the best and the rest just have to put up with what’s left. See also ‘American Airlines’ ‘Economy Basic’ Solidifies the Caste System in the Sky’.

A recent article points out that in spite of the many technological means we have to be connected, people are choosing to self segregate, placing themselves in more silos than already existed. Algorithms reinforce personal taste and bias and limit exposure to different viewpoints. At an even more basic level, live human interaction is limited when everyone is focused on their phone. See: ‘Self-segregation: how a personalized world is dividing Americans’. By ‘personalizing’ our experiences through technology we multiply the already existing divisions among us.

Reality, we have a problem

We have a problem with reality. Through the internet, as long as anonymity is possible we can potentially pretend to be whoever we like. Don’t like your real life? Choose another, or indulge in behaviour that otherwise wouldn’t be permissible. We’ll soon have augmented reality to take us even further down the rabbit hole.

Real life and real relationships are messy, challenging and hard work. It’s so much easier to be friends on Facebook. With the election of Donald Trump there has never been such a blatant seeping of Reality TV into real life. The glaring separation between Donald Trump’s life and that of the ‘ordinary’ people who voted for him wasn’t enough to prevent them thinking he will do something for them. Trump, the dealmaker, is set to make a series of deals that will leave Americans more segregated than ever.

Building the network, not just net worth

Trump and his cabinet represent an unprecedented level of personal net worth in power. The focus of such an economic elite can only be to maintain and increase that wealth at the expense of any greater good. What they fail to realize is that it is in nobody’s interest to accelerate polarization as they will inevitably do. Network theory demonstrates that when the linkages between hubs and nodes are too weak the network collapses. Healthy societies, democracies and organizations need input and connections that flow among all their elements. The more silos there are, the more human activity and potential is artificially trapped.

Real opportunity and possibility come from the emergent reality when barriers are broken, not when walls are built.