This website or its third-party tools use cookies which are necessary to its functioning and required to improve your experience. By clicking the consent button, you agree to allow the site to use, collect and/or store cookies.
Please click the consent button to view this website.
I accept
Deny cookies Go Back
You are here: Home / systems view of the world / Why Management Urgently Needs the Scientific Method 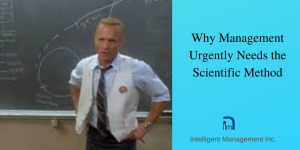 The following is an excerpt from Dr. Domenico Lepore’s new book ‘Moving The Chains’.

Before I began working in the field of management, I was educated as a physicist. However, it is not necessary to be a scientist to appreciate that from Galileo Galilei and Newton onwards, all the things that we know (as opposed to those “that we think we know”) and any meaningful advance in the human condition came from formulating a Theory and validating its realm of applicability. It is called the Scientific Method and it is high time for Management to fully embrace it.

We can start by understanding that Knowledge is built on Theory, a set of assumptions that allow prediction. A Theory has a realm of validity. This validity must be challenged by observation, and the boundaries of its applicability must be constantly revised.

In order for Knowledge to be useful, it needs Operational Definitions because they provide a way of putting communicable meaning into a concept, of translating a concept into a measurement of some sort.

Why does Management need Theory? Because Management must be rooted in prediction: without theory, the job of managers becomes a “whack-a-mole” exercise devoid of any ability to predict the outcome of their actions. Management also needs Theory because nothing can be learned from examples and experience without Theory; without it we would not be able to interpret the results of our observations. For this reason, studying case histories, as many Business Schools ask their students to do, makes little sense. And although thousands of examples do not make a Theory, one example that contradicts a theory is sufficient to redesign the boundaries of a Theory’s validity. This is how science advances.

The kind of Knowledge that we need and that should inform leaders in Industry, Government, Health Care and Education, was put forth by Dr. W. Edwards Deming (American statistician and physicist) in his seminal book The New Economics and takes the name of the Theory of Profound Knowledge (TPK).

What it advocates is for management to commit to take a knowledge-based stance, to understand the “field of forces” that shapes the reality of an organization and to position events within the right framework. TPK moves management from the quicksand of empiricism (experience, opinion, examples) to the safe shore of epistemology (Knowledge).

There are four foundational elements that make up Deming’s Theory. I have taken the intellectual liberty to (slightly) adapt Deming’s elements in light of the last 25 years of on-the-field development:

1. Systems Theory (how the whole can be bigger than its parts)

2. Theory of Variation (that provides a rational foundation for understanding process behavior)

3. Theory of Knowledge (how we know what we know—Philosophy of mind, Epistemology, and Neuroscience operate/act according to a theory so as to have a reasonable conceptual handle on the outcome of our actions)

These four elements are all interdependent and what emerges from understanding how these interconnections operate is nothing short of a new organizational and economic paradigm.

This new paradigm is based on cooperation, whole system optimization, a win–win mindset all along the value chains, and openness and transparency in every aspect of work and business interaction. It calls for an understanding of complexity and a radical overcoming of the silo mentality that still rules much of corporate life; it is firmly focused on designing, sourcing, producing, and distributing goods and services that improve people’s lives; it rests on the assumption that humans are intrinsically motivated to do good, take pride in their work, and have an innate desire to learn and be part of something bigger than themselves.

Sustainability is predicated upon our understanding the laws that govern complexity—what happens when we begin to interact. The New Economics becomes, then, an economics of integration, where the network-like nature of our economies is understood at its most fundamental level.

The New Economics is based on well-studied and understood elements of Knowledge; sadly, these are still largely ignored in Business School curricula that are still mainly based on Finance and Cost Accounting principles and the mindset of local optima that they create. As Dr. Deming used to say, “Business Schools teach how to raid NOT how to lead a company.” 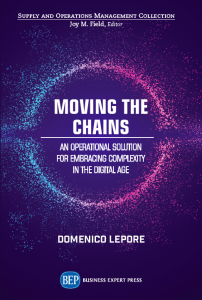