This website or its third-party tools use cookies which are necessary to its functioning and required to improve your experience. By clicking the consent button, you agree to allow the site to use, collect and/or store cookies.
Please click the consent button to view this website.
I accept
Deny cookies Go Back
You are here: Home / Learning Centre / What is a Systemic Organization? / Quality

The way the story goes, the word “quality” first appeared on a memo at the Bell Labs on May 16th 1924. The memo was written by a physicist called Walter Shewhart and was part of the work that Dr. Shewhart was conducting to address the issue of excessive variation, hence waste, in a manufacturing process.

The core of its work was the realization that variation, which is intrinsically connected with any human activity, can be managed if we understand its nature. The body of knowledge that Dr. Shewhart developed in response to an economic problem, the theory of variation, originated a very powerful application named Statistical Process Control (SPC).

As a result of his affiliation with Shewhart, Dr. Deming was able to appreciate all the ramifications (and the myriad of potential applications) of SPC. Deming used SPC as a conceptual basis for his unsurpassed management philosophy described in his two books, “Out of the Crisis” and “The new Economics”. Indeed, Dr. Deming is unanimously considered the father of the Quality movement.

Quality was defined as “on Target with minimum variance” and this definition has guided and inspired the work of three generations of quality professionals all over the world. In the last 30 years an international committee called ISO TC 176 has generated a family of “Quality Standards” aimed at raising the bar in management practices. The results achieved by the committee, whose work Deming never endorsed, have not been particularly commendable but, in fairness, its aim was true.

Quality and its most famous offspring, Quality Management, are holistic, systemic approaches to management. They are based on a clear definition of goals and the interdependencies that must be designed and activated in order to achieve those goals. These interdependencies, all of them, must be managed by keeping variation predictable and by constantly reducing it. These concepts are embodied in Deming’s diagram “Production viewed as a system” and in the PDSA cycle with its underpinning quest for statistical understanding. 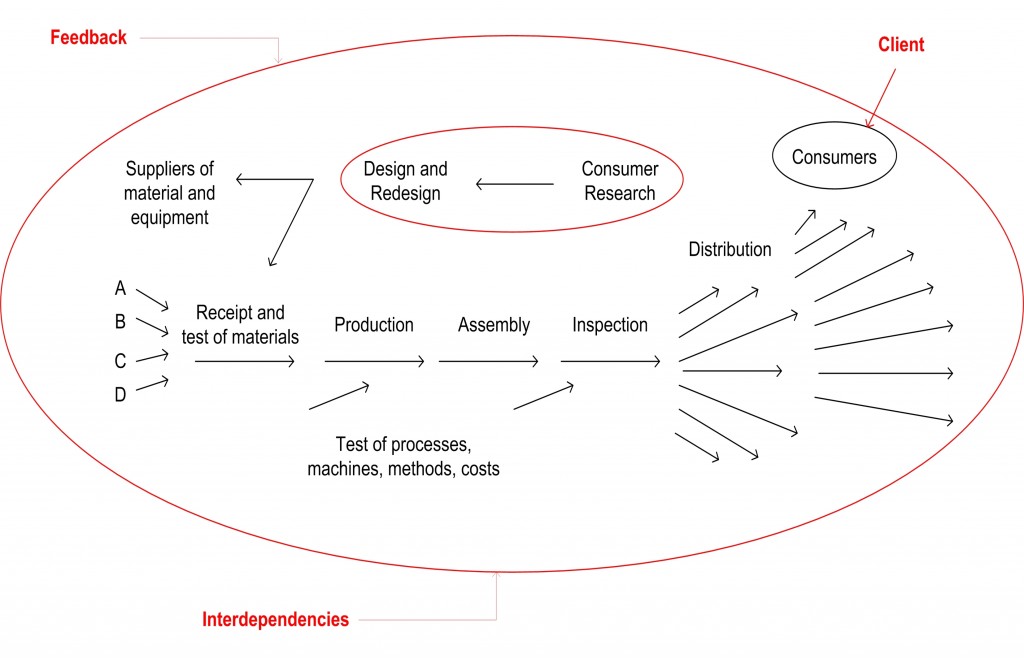 Production viewed as a system

“Quality is made in the boardroom”, Dr. Deming used to thunder, “right at the top”. Unfortunately, he went largely unheeded and Quality has gradually deteriorated into a plethora of statistical nonsense labeled with colorful and meaningless names like “six-sigma”, “business process re-engineering”, “kaizen”, “lean” etc. The conceptual flaw of all these techniques is the failure to understand the systemic role that variation reduction plays in the achievement of economic results. Very often, in fact, these approaches turn out to be nothing more than locally-minded cost saving exercises. Quality, instead, with its underpinning bedrock of statistical studies, aims at promoting and sustaining innovation and growth by leveraging an intrinsically stable organizational system.

The Decalogue, which is based on Deming and TOC, completely embraces the principles of Quality as originated by Shewhart and Deming. It does so by overcoming the perceived conflict between an allegedly reductionist approach (TOC) and a genuinely systemic one (Deming). The result is the “choked system” whose practical realization is supported by the Decalogue’s ten steps.

The Decalogue, while pursuing relentless understanding of variation throughout the system, elects the constraint as the point in the system where performances are measured and adopts the set of systemic measures promoted by TOC: Throughput, Operating Expense and Inventory and their relations. The Decalogue combines, coherently and rigorously, Deming’s system approach with the focus and emphasis on speed provided by TOC. In the Decalogue approach the constraint is strategically chosen and almost never changes. We “elevate” the constraint (increase its capacity) only after all the relevant subordinating processes have been themselves “elevated”. Indeed, this ability to increase the capacity of processes lies in their intrinsic statistical predictability. Without such predictability it would be impossible to increase the system’s capacity without moving the constraint elsewhere. Simply put, it is the statistical predictability of the system’s processes that enables us to harness the focus that comes through leveraging the constraint.

Intelligent Management (IM) further expands on The Decalogue by broadening the framework for its application. IM is the first attempt to connect allegedly “separate” realms of human endeavors into one, unified, coherent and actionable body of knowledge. Unsurprisingly, the catalysts for this effort are the studies on networks that have developed over the last thirty years and that find in nonlinear dynamics their most powerful aid.