This website or its third-party tools use cookies which are necessary to its functioning and required to improve your experience. By clicking the consent button, you agree to allow the site to use, collect and/or store cookies.
Please click the consent button to view this website.
I accept
Deny cookies Go Back
You are here: Home / Learning Centre / What Are the Thinking Processes? / Real Life Example of a Future Reality Tree – The Proprint Case Study

Starting From The Proprint Conflict Cloud

The core conflict cloud below portrays the current (at that time) reality of a manufacturing company producing special equipment for the printing industry. In my experience no person or company has ever benefitted from reading another person or company’s core conflict. The reason for this is multifaceted. First, every company believes it is special and unique – nobody compares; moreover it is difficult to penetrate quickly somebody else’s subject matter. Second, reading a conflict is not the same as building it; the focus and comprehension in the two scenarios are radically different. Third, the language that management uses to portray its reality is peculiar to that group of people. This is why, in fairness, I do not believe reading this cloud and what follows will be of great help. However, in order to increase even minimally the chances of being successful, I have done some editing work to the original conflict so as to make it as general as possible. 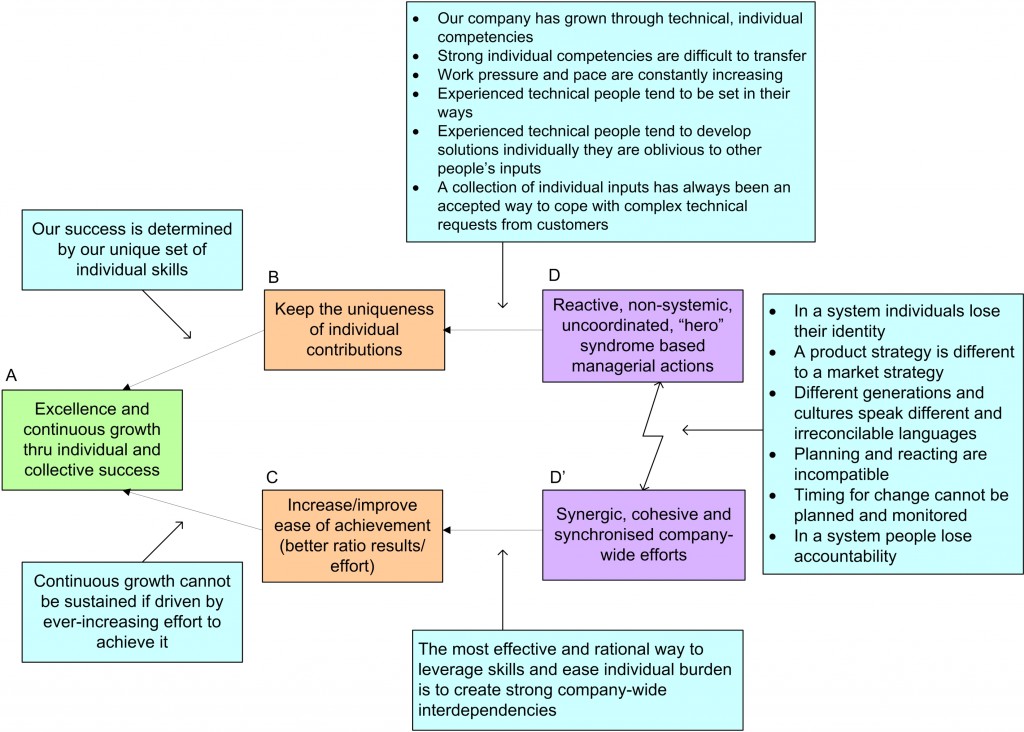 The company, which we shall call ProPrint, had about 200 employees and two facilities. It had been on the market for 50 years and had been bought out by some of the existing management who had teamed up six years previously with some keen, willing and long-term focused capital. ProPrint was well known for the quality of its products, had a well-established customer base, no union issues, and enjoyed a respectable cash profit generation.

The main UDEs of ProPrint were all connected with its legacy. It had been a small, family owned company for decades, where hands on experience and closeness to the owner/founder were valued more than formal education and knowledge. The skills considered critical for the product were in the secretive hands of a few elderly employees, and the focus of the company was exclusively on the product rather than the customer. The sudden jump in revenue ensuing the takeover by management had created a clear disconnect between traditional work habits and what was needed to cope with the pace of growth. Moreover, ProPrint did not seem to be able to take advantage of a growing demand coming from abroad.

In the course of a three-day session, the top management team of eight people were able to clarify and fortify their intuition about the issues they were facing, i.e. the conflict that was trapping them. They were able to verbalize clearly the forces that were keeping ProPrint from evolving. The management at ProPrint invested heavily towards this end and they came out with the considerable result we reproduce here. I took the liberty of making some simplifications to make it more legible. 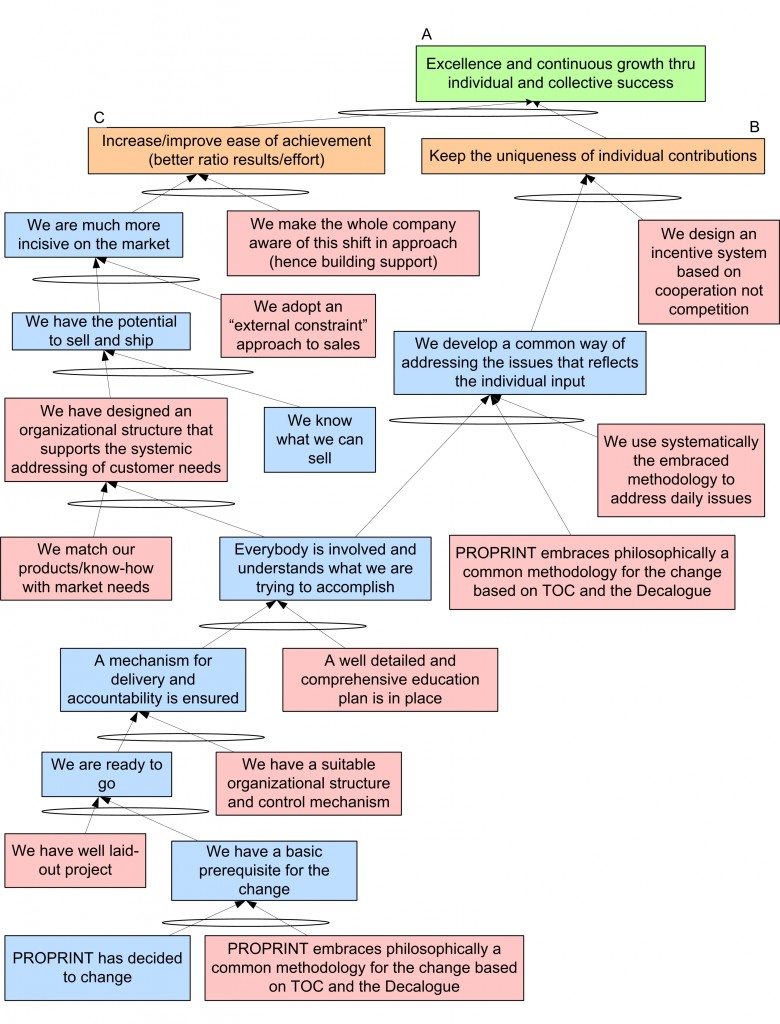 This is the part of the FRT that connects the injections to the achievement of the goal via the simultaneous satisfaction of both needs. (A more complete and, for the purpose of this book, unnecessary version of this tree should show the links between the achievement of the goal and all the DEs that would replace the UDEs out of which the core conflict was developed).

The set of injections developed by ProPrint was validated in terms of their completeness by linking each injection through cause-and-effect logic with “future” intermediate states of reality that are achieved as a result of the accomplishment of the injection. Indeed, these injections are “pies in the sky”; they do not exist in reality and they are, at this stage, only logical statements.

The strength and the value of the FRT are in the understanding it provides of the comprehensiveness and the breadth of the effort needed to transition from the current to the future state of reality. The thoroughness of this effort and the completeness of the understanding we derive from it are further enhanced by the meticulous test we carry out on potential negative implications deriving from the coming into existence of the injections. The TPT that supports our understanding in this effort is called Negative Branch Reservation (NBR).

The logic of this tool is simple but the mechanics require some attention. In essence, with this tool we verify if the injection suggested carries with it potential negativities; if we can identify them we can try to diffuse or reduce their impact. The steps to build this “branch” are the following: 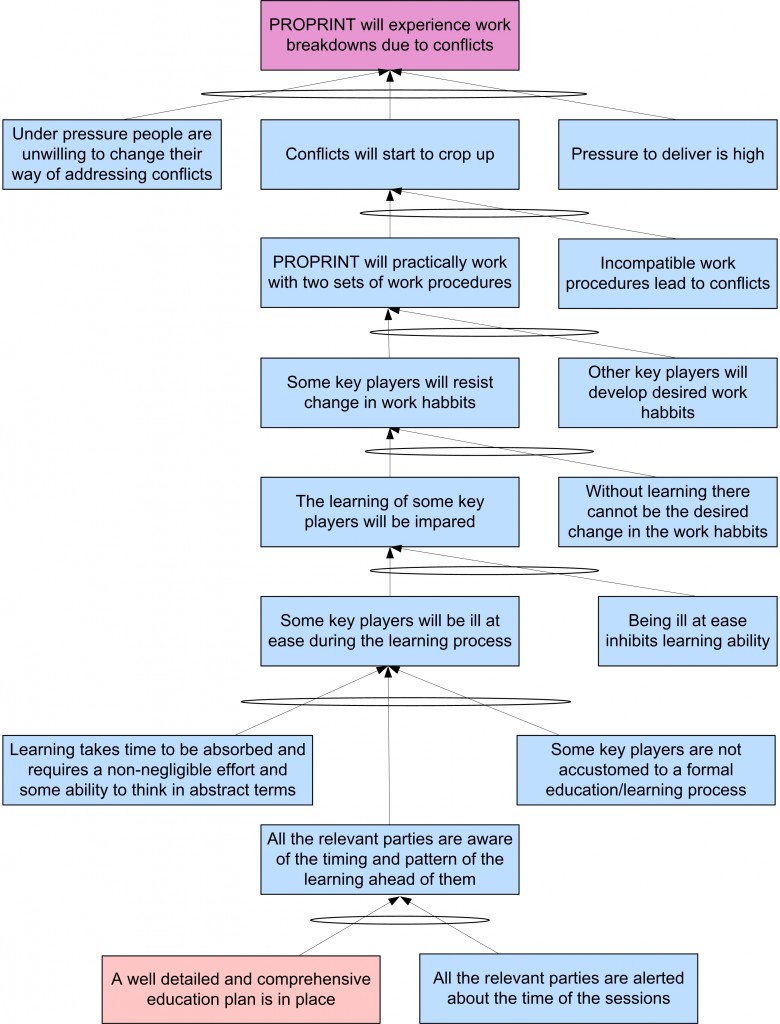 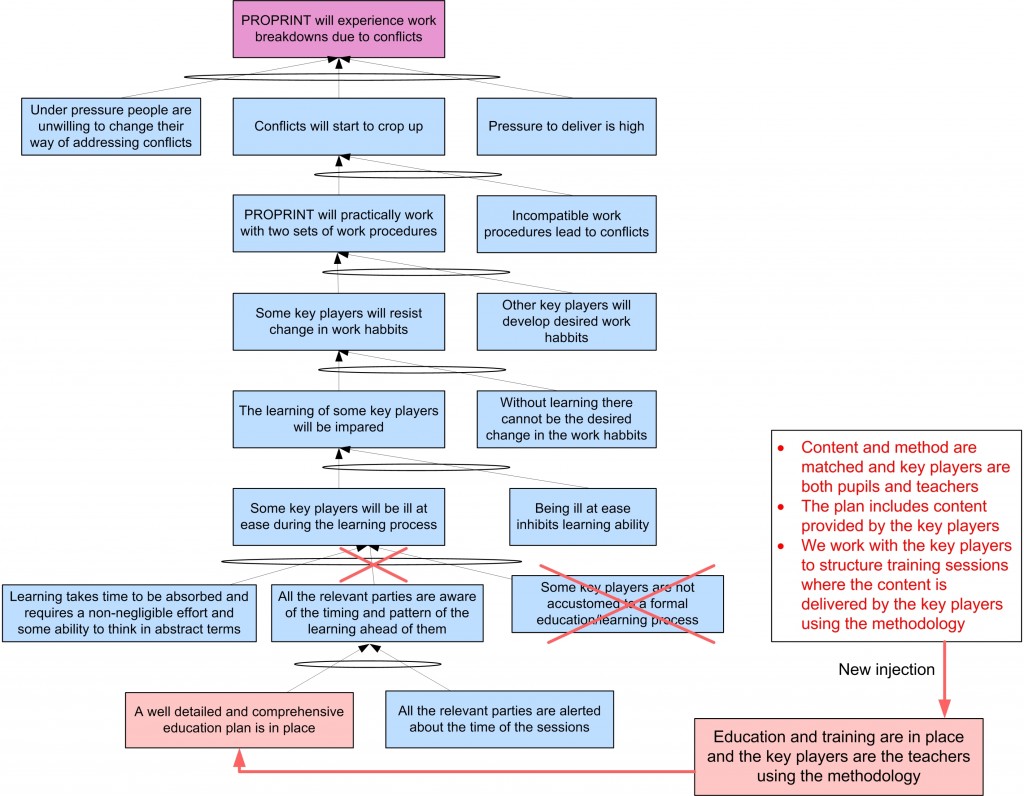 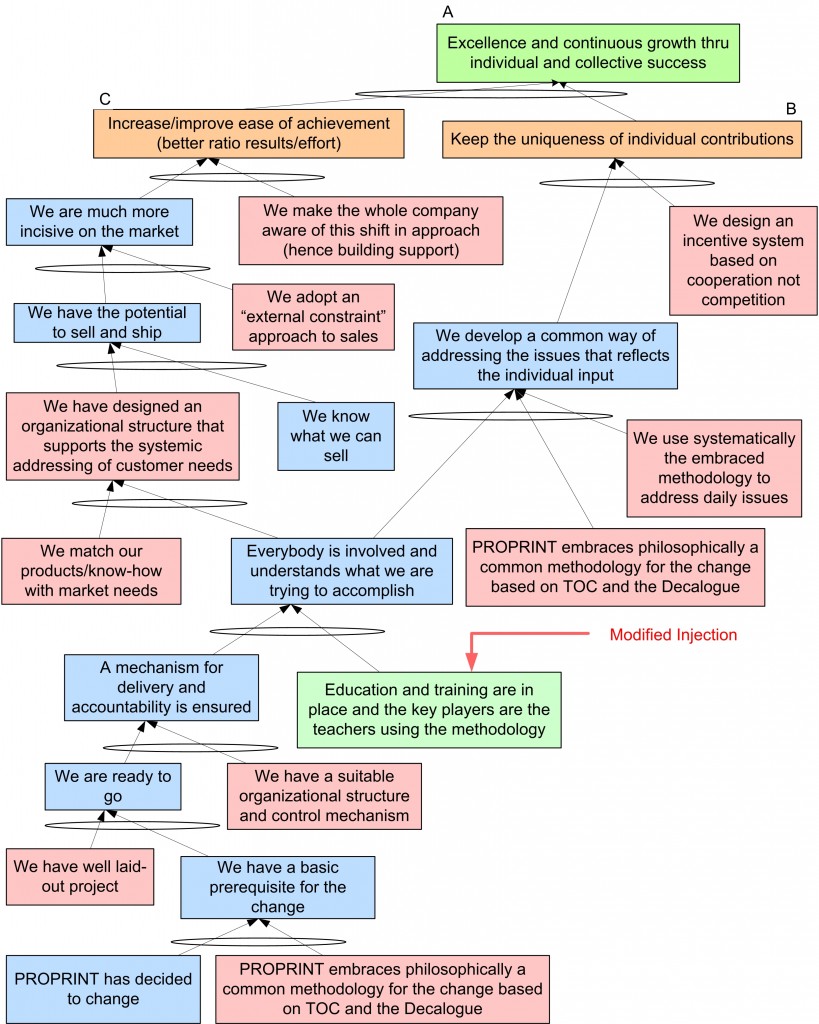 So far, we have worked with the basic starting situation and pictured it using the tree of our current reality. We have seen how ProPrint built its own current reality. Depicting their reality so clearly helped the management team to develop the focus and the desire to build a thorough understanding of how it would be possible to evolve out of that reality towards a better future. The FRT and the NBRs provided that understanding and the global vision of how the company could move ahead without losing itself. The bridge between the present and the future had been built.

Excerpt from Domenico Lepore’s book ‘Sechel: Logic, Language and Tools to Manage Any Organization as a Network’.